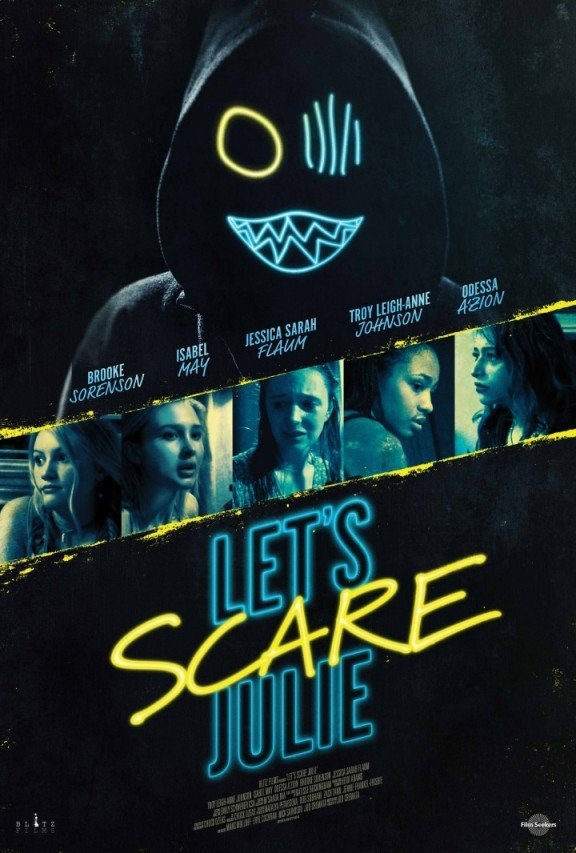 A group of teen girls set out to scare their reclusive new neighbor, but the prank turns to terror when some of them don’t come back.

LET’S SCARE JULIE was filmed in one uninterrupted, continuous take; once the camera started rolling, it never stopped until the end. There were no cuts, alternate takes or additional footage used during filming. These events happened in real time.

On this fateful evening, Emma, 17, who recently moved in with her cousin Taylor, 18, after her father’s untimely death, becomes the victim of a prank perpetrated by Taylor’s group of friends. Wanting to up the ante, the girls hatch a plan to scare Julie, the reclusive girl across the street, who they have never seen and know nothing about. All they know is Julie is alone at her house tonight – a house rumored to be haunted after a boy vanished many years ago.

What starts off as a simple plan to have a good laugh, quickly escalates as some of the girls don’t come back from Julie’s house. Is it all just a set up for the girls to play an elaborate prank on Emma or are the dark rumors about the house across the street actually true?

As more people start to disappear, including Emma’s younger sister, the clock is ticking for Emma to figure it out.

This goosebumps story is the first foray for teenagers to be exposed to the horror genre. With underlying themes of bullying and teen pressure, we watch the real-life struggles young women are exposed to and how making the wrong choices can end with horrific results.

“There is nothing better than finding a film you can fully immerse yourself in, and by placing the audience at the heart of Let’s Scare Julie, it feels like you are part of some super intense scare experience” 4/5

“[It] is a clever, well-crafted teen horror that creates a wonderfully dark atmosphere reminiscent of The Blair Witch Project”

“There’s a free-flowing, naturalistic element to the way everything plays out, from the conversations to the spookiness, which is rare for the genre but works surprisingly well”

“This is a bold film which goes where others fear to tread, presenting teenage girls as they are rather than as most horror films like to imagine them, with all the urgency and cruelty and confusion and rough edges that involves”

“The plot progression, characters, and events are smartly managed, making terrific use of a very pared-down production. Let’s Scare Julie knows when to show and when to hold back by simply telling instead, letting the viewer’s imagination fill in the blanks”